Marriage proposal at the Bunkers del Carmel in Barcelona

Albert and Regine have known each other since high school. He decided to propose to his long-term girlfriend while on a trip to Europe and he chose the romantic Barcelona as the place of his proposal. He wanted to make it very special, with not too many people and with a breathtaking view of the city. When we had our planning call, we decided to do in at the Bunkers del Carmel at sunrise.

It was early morning, the city was slowly coming to life. I climbed all the way up to the Bunkers and waited at the viewpoint. It was windy and quite cold, and… they were not coming. I waited, and waited. I checked my phone but there was no message. The sun was already coming up and I was beginning to feel worried it’s going to be too late! Then I got the text. The taxi driver left them at the other entrance and they are climbing up the stairs. What a relief!

After a few minutes I saw the couple walking up to the viewpoint. They jumped the fence and I started taking the “touristy” photos of the view, pretending I’m not taking photos of them. And then Albert went down on his knee. Regine’s surprised face was priceless! She was so overwhelmed with joy that she didn’t even notice me taking photos of them for about five minutes! I then presented myself and we continued shooting faces full of love.

After the proposal, endless kisses (just imagine a massive love overflow!) and raising the toast with a glass of local cava, we walked down to catch a taxi to the Gothic Quarter, where we continued the engagement photo shoot.

Don’t know how to propose in Barcelona? Let me help you make her say YES! Check out more here.

Get my secret list of 10 top locations to propose in Barcelona that will help you impress your girlfriend! By filling up the form you will subscribe to my newsletter, where I occasionally send promotions and useful information.

Your ebook is on the way! 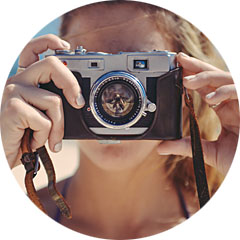